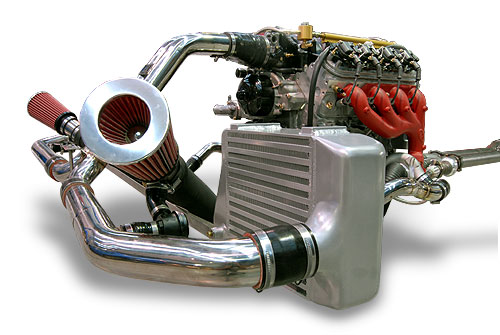 An intercooler is just another name for a heat exchanger that is used to cool air that has been compressed by either a Super-Charger or a Turbocharger. The intercooler is placed somewhere in the path of air that flows from the turbo/supercharger to the motor. An intercooler is needed because of the physics of air described in the Ideal Gas Law, that is PV=nRT.

Explaining the ideal gas law as basic as we can, we can say that because pressure and temperature are directly proportional, as you create more pressure with your turbo or supercharger, you produce more heat as well. At first one might think: “who cares how hot the air is that is going in my motor” , but there are two main reasons why this is a bad thing.

1. Hot air is less dense and therefore contains less molecules of oxygen per unit volume. This means less air for the motor in a given stroke and therefore less power produced.

2. Hot air also causes a higher cylinder temperature and therefore can aid in pre-detonation of the combustion cycle causing what we call,detonation.

When intake air pressures are kept at a modest or low boost pressure, an intercooler may not be necessary for your set-up. That being said, a colder denser charge will not only be safer for your motor, but add power as well. With their not being to many things that ad safety and engine longevity as well as power, adding an intercooler to your forced induction set-up is a no brainer.

Gaining Power from an Intercooler

Well as stated above, intercoolers can make are charged air denser so we can fit more in the cylinder, but also they are a HUGE aid in tuning out detonation. We have all seen the gains in torque that can be had by advancing timing a few degree’s, and with a colder air temp, we can help drive off the condition of pre-detonation.

To give you an idea of the gains that can be had. At a local dyno shoot out of Mitsubishi Evolutions, Evo , Vs Subaru Impressa WRX and STI, one of the participants dyno’d 413 whp. Then some buddies of his grabbed a couple snowballs from the snow outside and tossed them on the intercooler. The car then did another pull and I watched in amazement as those snowballs melted before my eyes in just the 8-10 seconds the pull lasted. That gives you an idea of the amount of heat an intercooler is pulling out of the system. The results: 448 whp , a gain of 35 whp from a couple of snowballs. You can guess what happened next. The buddies of this guy then ran outside again this time shoving snow all into and around the whole intercooler. He does another pull and this time measures 471 whp, a gain of 58 whp. Now imagine being able to tune around those colder inlet temperatures and being able to increase the timing a bit. Even further gains could be realized.